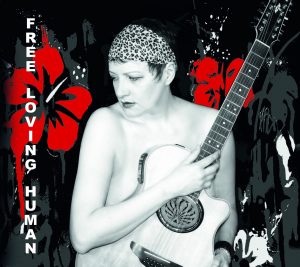 Shout it loud, Sofaï has a new album. Shout it very loud, as one of the leading lights of the independent European blues scene has produced some of her finest work. Free Loving Human is an eclectic mix of influences and styles that should elevate Sofai to the top table of Euro blues, feasting on a variety of soul, pop and rock and roll dishes along the way.

She may not yet be a household name, but Sofaï has certainly paid her dues. Growing up with the sounds of the sixties and seventies, one of her earliest influences was Elvis Presley. Her soleful rendition and clever choreography of In The Ghetto is a fitting tribute to The King.

However, her musical tastes were many and varied, ranging from folk rock and blues in the shape of Creedence Clearwater Revival, Joni Mitchell and Traffic, through the harder rock of AC/DC, Led Zeppelin and Bruce Springsteen, and onwards to the black grooves of Eddie Floyd and Etta James. Other influences are also clear with this latest release, as she describes her music as “A kinda melting pot of what I’ve listened to – it’s rough, but it has to be groovy!”

She was never a fan of school, and grew up with the idea of becoming a singer / songwriter, and strapping on a stylish guitar along the way.

Her persona is also a heady mixture; hardworking blueswoman with a voodoo style! Her bio describes her musical universe as “Delightful Wildness”, an epithet so perfect it had to be made for her.

For Sofaï, the writing craft is part of her essence. “I cannot sit and try to work, getting depressed because nothing’s coming. I just have to be aware of my feelings. I have always got a guitar close to me, or my little recorder in my pocket when I am away from home.”

It comes as no surprise that her desire to write and perform sees her drawn towards musical greats that she would have loved to share a stage with. Otis Redding, Janis Joplin, Richie Havens, all sadly passed on. Steven Tyler, Bruce Springsteen, Bonnie Raitt, maybe one day Sofai!

She loves biker and blues festivals, particularly in her native France, and she has opened for Beverley Jo Scott, Elliott Murphy, Debbie Coleman, Carmel and Sharrie Williams in Belgium and Switzerland. The stage is hers, with England and the US on the agenda.

Her band are a family, with relationships across the musical landscape, and the strength of their familial bonds is clearly etched into the new album.

Californian bass player Marten Ingle has written songs with Sofai for more than a decade, and his musical pedigree takes in Percy Sledge Billy Paul, Tony Allen and Ray Lema.

Guitarist Mar Todani has been with her for three years. Born in Japan, Mar moved to England in 1994 and settled in Paris in 1998. He has played with American blues shouter Big Joe Turner, and he adds something special to the music. Sofai has a special place for him. “He’s really precious. He is that kind of guitar player that I’m in love with, because I want something “catchy” on Guitar riffs and need something very melodic on every solo part.”

Drummer Danny Montgomery also hails from California, and as well as playing with Percy Sledge and Billy Paul he has hit the skins for American jazz duo Tuck & Patti and singer songwriter Willy Nile.

French keyboard player Slim Batteux completes the set, another who has shared a stage with Percy Sledge and Billy Paul, as well as Ray Charles and Brazilian singer and percussionist Carlinhos Brown.

Their time in the studio was well spent, with Free Loving Human the result of their musical and emotional creativity. Each song is defined by the opening guitar, and each has its own raison d’être.

Never Give Up takes blues to the edge of pop, as Sofaï fights the music business with the belief and desire to get her through. Bonoboland is a fanciful tune with a mambo beat and a brass section that comes straight of the big band sound. The Bonobo of the title is the sex loving chimp from the Congo basin, and the message dates back to the hippie mantra of “make love, not war!”

After the light introduction of the first two tracks the album leans towards a heavier rock sound with Rising Up From The Ashes, a poignant reminder of the frailties of life, dedicated to a friend who survived the Bataclan Theatre terrorist attacks in Paris. It could be mischievous to suggest that Everything, dedicated to all businessmen and in particular President Donald Trump, should deliberately follow a track that gains its message from terrorism, I guess only Sofaï will know the answer to that. The song itself is upbeat, almost frivolous, taking the listener towards the American pop sounds of the B52s.

The Sam & Dave classic I Take What I Want is driven by electric blues. Yes, this is blues, and don’t you forget it! All blues albums must have a love song, or many love songs. Lost or found, new or old, its all about love. Sofai makes no apology for including Deep In My Soul as her only tribute to that deepest of emotions, exploring her inner self in a true blues statement. Next its off to the world of soul with Don’t Let My Chance Go By, suggesting that life has everything out there, you just have to open the box to see what is inside. The title track of the album is a truly outstanding piece that could yet become a blues anthem, with an unmistakeable Aretha Franklin vibe sitting atop the melody that pounds at the doors of gospel.

Sofaï returns to her earliest roots of progressive or even glam rock with Don’t Bring Me Down, with a guitar riff that would not be out of place on a Marc Bolan track. The song pays tribute to Myriam, the teenager from Kurdistan who fled to escape the Turkish army, was bombed on more than one occasion, but who still managed to write a book and keep a bright outlook on life; a lesson from the blues!

Al Green’s Take Me To The River is the second cover on the album, but Sofaï leaves Mr Green’s version in a different world, adding echoes of Henry Mancini’s Peter Gunn. The bonus track, Life Goes On, is a haunting tune emanating from a personal tragedy at the Bataclan Theatre, an event that became a tragedy for the world.

Sofaï does not shy away from anything, this is her world, this is her way. She is influenced but does not imitate, she pays tribute but does not bow down. Free Loving Human is another mile along her personal blues highway, but this particular milestone will be her most significant yet.

Catch Sofaï on tour. Free Loving Human will be released in September 2018.

2010   « LET THE GOOD TIMES ROLL »
Featuring Elliot Murphy for a co-writing song and a duet. She was the opener on Elliott Murphy Tour 2011.